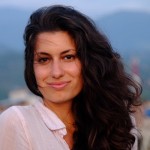 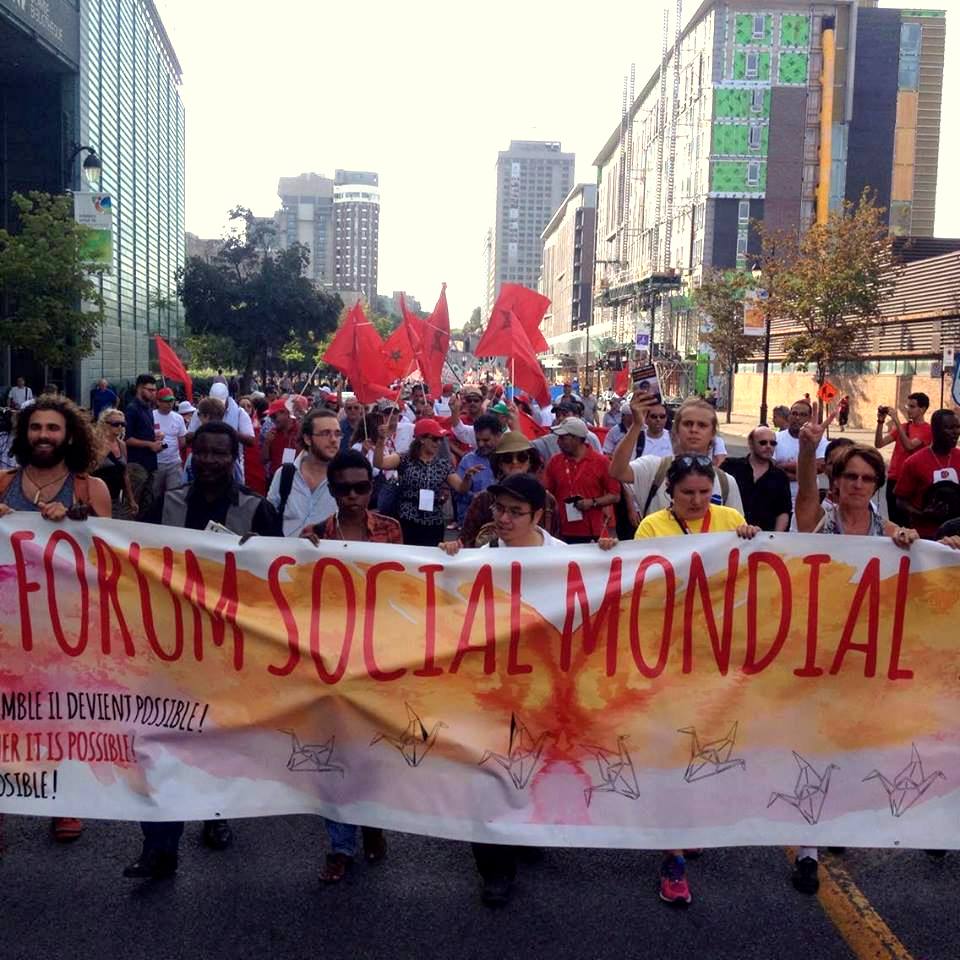 The World Social Forum (WSF), this large gathering of civil society that allows the voices of thousands of citizens of the world to be heard, was held in Montreal from August 9th to 14th, 2016. Launched in 2001 in Porto Alegre, in Brazil, as a counterweight to the World Economic Forum held annually in Davos, in Switzerland, this movement of ideas and people has now become a catalyst to shape alternatives to an unequal, marginalizing and environmentally destructive form of globalization. The choice of holding the 2016 WSF in a “Western” country was intended to break the insidious barrier partitioning North and South. As Raphaël Canet, co-coordinator of the WSF, expressed it: “there is no developed and underdeveloped worlds, there is only one poorly developed world”. In other words, solidarity needs to build in all directions, South-South, North-North, South-North, North-South, and even beyond this preconceived scope of the cardinal axes.

Working for over 50 years to build a better and united world, the International Studies and Cooperation Centre (CECI) has joined this important meeting. Interspersed among five days of exchanges, learning and involvement in several solidarity-based activities, their contributions mainly addressed issues of fair trade and international volunteer cooperation.

At the heart of CECI’s participation in the WSF 2016 was a wise, humble and pleasant human face. It was the face of Antonia Rodriguez Medrano, co-founder of the Asociación Artesanal Boliviana Señor de Mayo (ASARBOLSEM) an artisanal textile production association, and former Minister of Productive Development and Productive Economy of Bolivia.

The choice of this guest of honor was very astute, and provided a golden thread to follow throughout our activities. A perfect embodiment of what CECI does in different parts of the world, Antonia and her ASARBOLSEM Association contribute to the reduction of poverty in the community and fight against all forms of discrimination, particularly against women. Even more, Antonia has also amassed over 20 years of experience in the fair trade movement, a key element in ongoing CECI and the international voluntary cooperation program Uniterra (jointly managed with the WUSC) efforts to encourage more inclusive economic growth.

Her presence resulted in multiple meetings, and from the large opening march on August 9th, to the many conferences and workshops that have requested her involvement, Antonia enriched the experience Uniterra and many other participants had by sharing her ideas, convictions and by her true humanism. 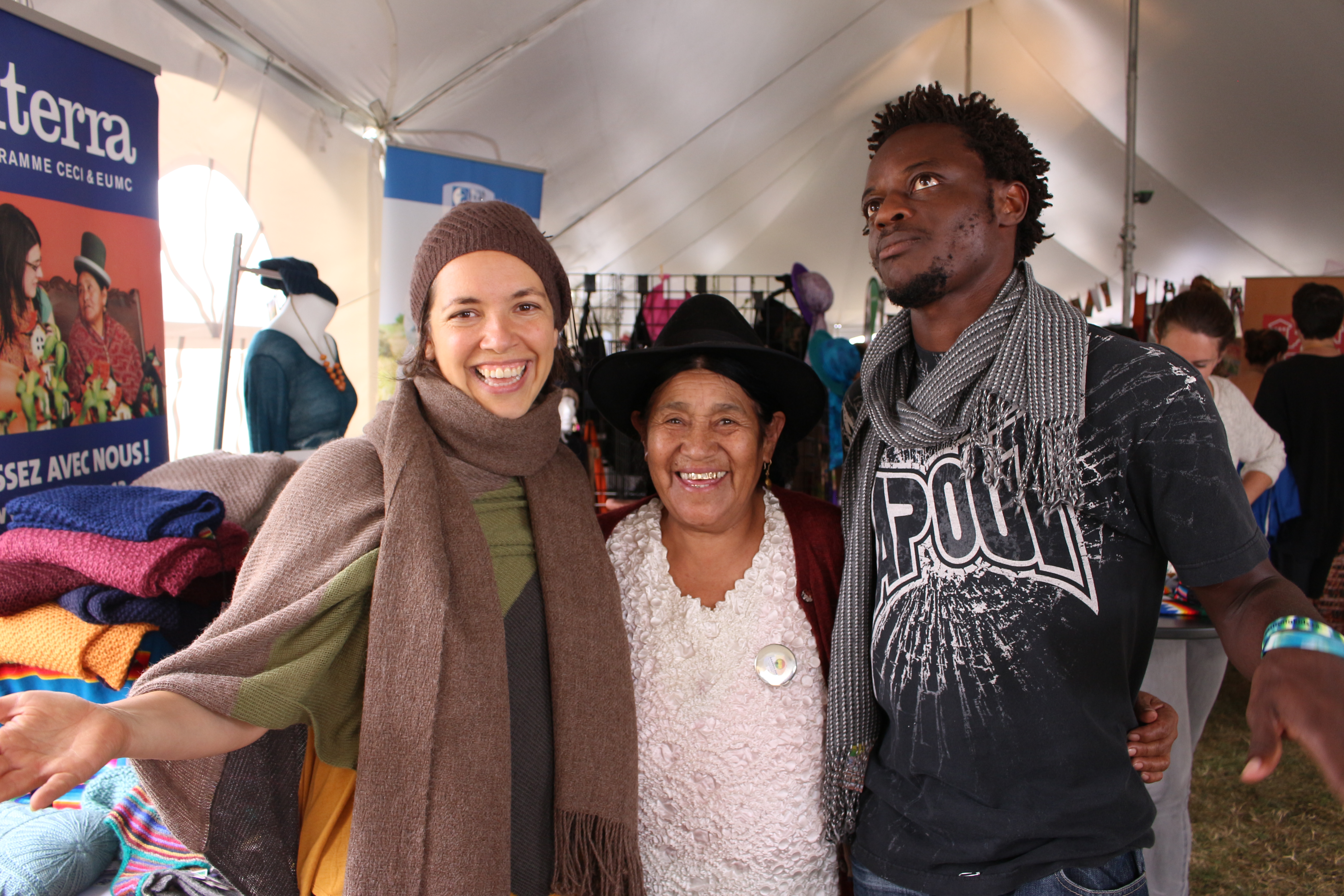 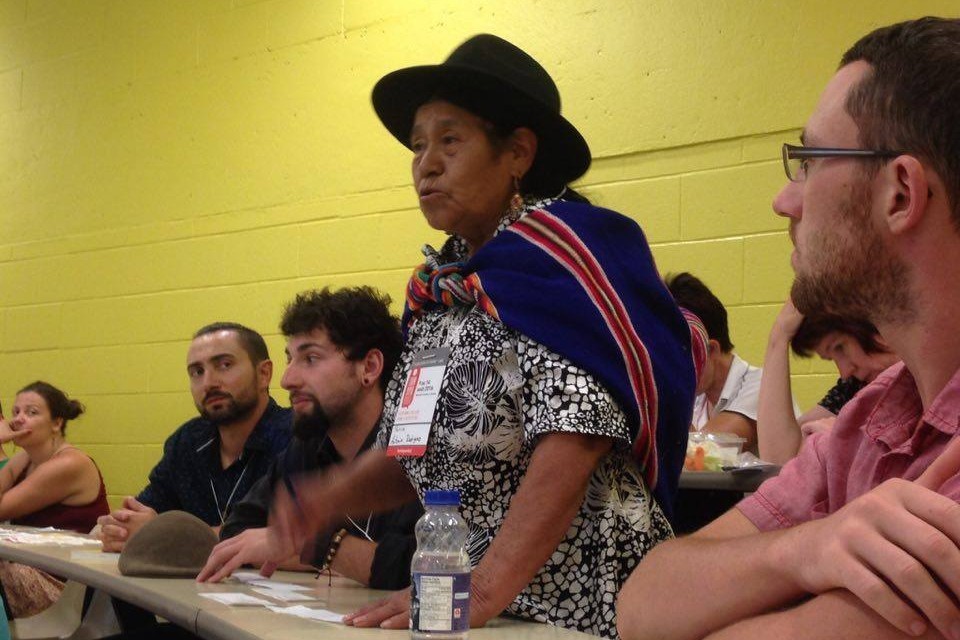 Having been the subject of a dozen workshops, fair trade occupied a prominent place in CECI’s involvement at the WSF. A full day of fair trade concept awareness was held in the Centre for Sustainable Development on Thursday, August 11th.

It began with a workshop on the Les enjeux de la filière cacao-chocolat: vers une alternative équitable, which has allowed the participants to become aware of the deeply unequal power dynamics underlying the Cocoa industry, and the potential of fair trade to reverse this trend. That was followed by the Commerce équitable: témoignages croisés de partenaires internationaux conference, organized in partnership with Équiterre, FEM International, the Association québécoise de commerce équitable, La Siembra (Cocoa Camino) and Artisans du Monde France. Among other things, this conference presented the experiences and concerns of representatives from Uniterra partner organizations in South America, including the Bolivian ASARBOLSEM Association and the Peruvian Norandino cooperative. An ‘ethical fashion show’ offered by the ETHIK BGC / FEM International boutique closed out the day with a splash color and style!

In the same vein, a kiosk under the huge Fair Trade and Food tent at Jarry Park that hosted the Ecosphere Fair on August 13th and 14th was also present. In addition to the many discussions that took place there, it was an opportunity to promote fair trade products from ASARBOLSEM alongside various partners, including Ten Thousand Villages and Karité Delapointe.

There were many rewards that CECI reaped from participating in the WSF 2016. Public awareness of the importance of our choices as consumers, updating the current trends in fair trade, strengthening ties with long time partners, building relationships with new allies, frank and profound discussions among diverse groups and individuals to “rethink” and “revitalize” the fair trade movement, are just some examples. The WSF 2016 was not only a “fair trade event,” it has also brought new life to the movement, pushing the importance and need for an alternative economic system, one that is more just, more caring and more environmentally friendly. 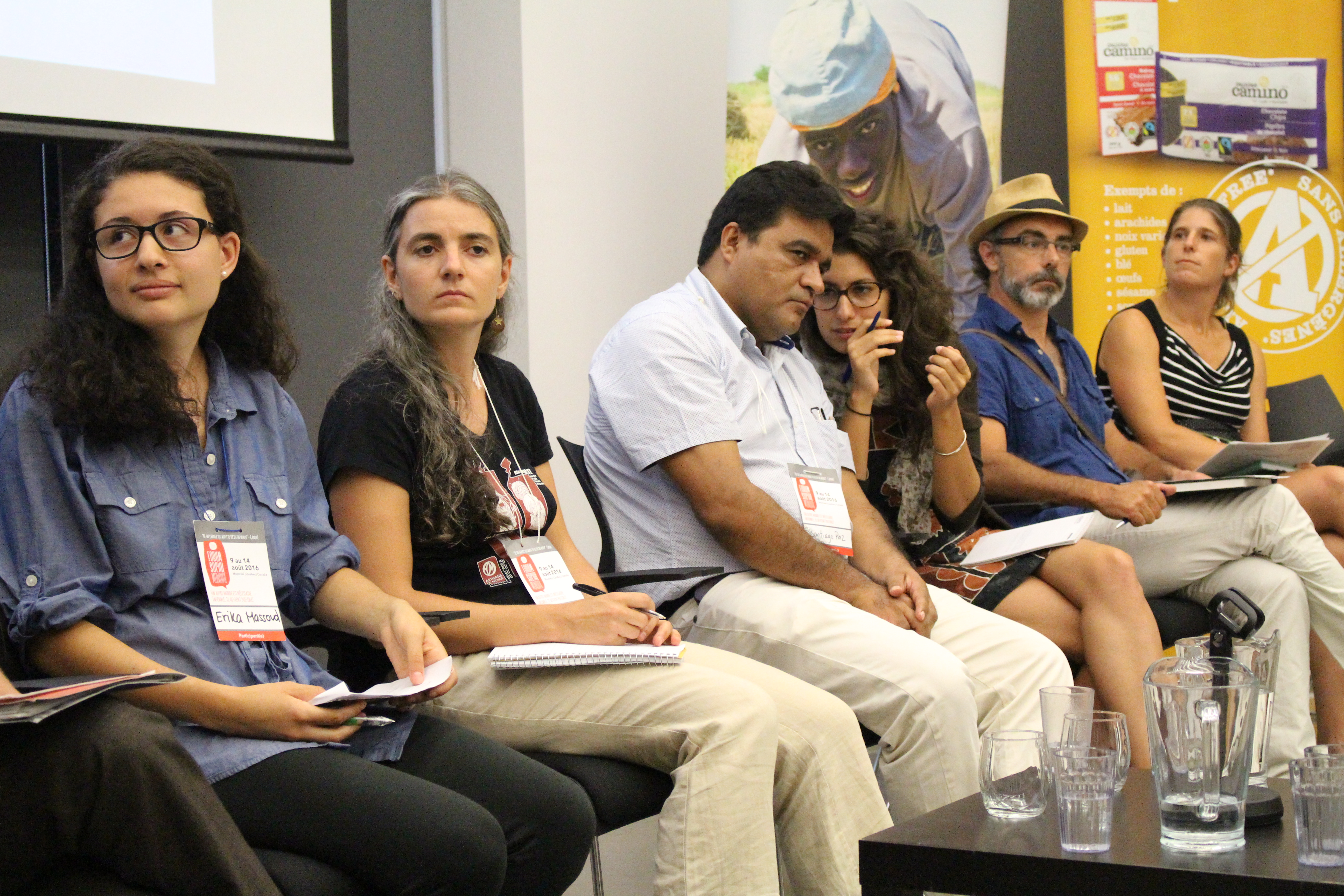 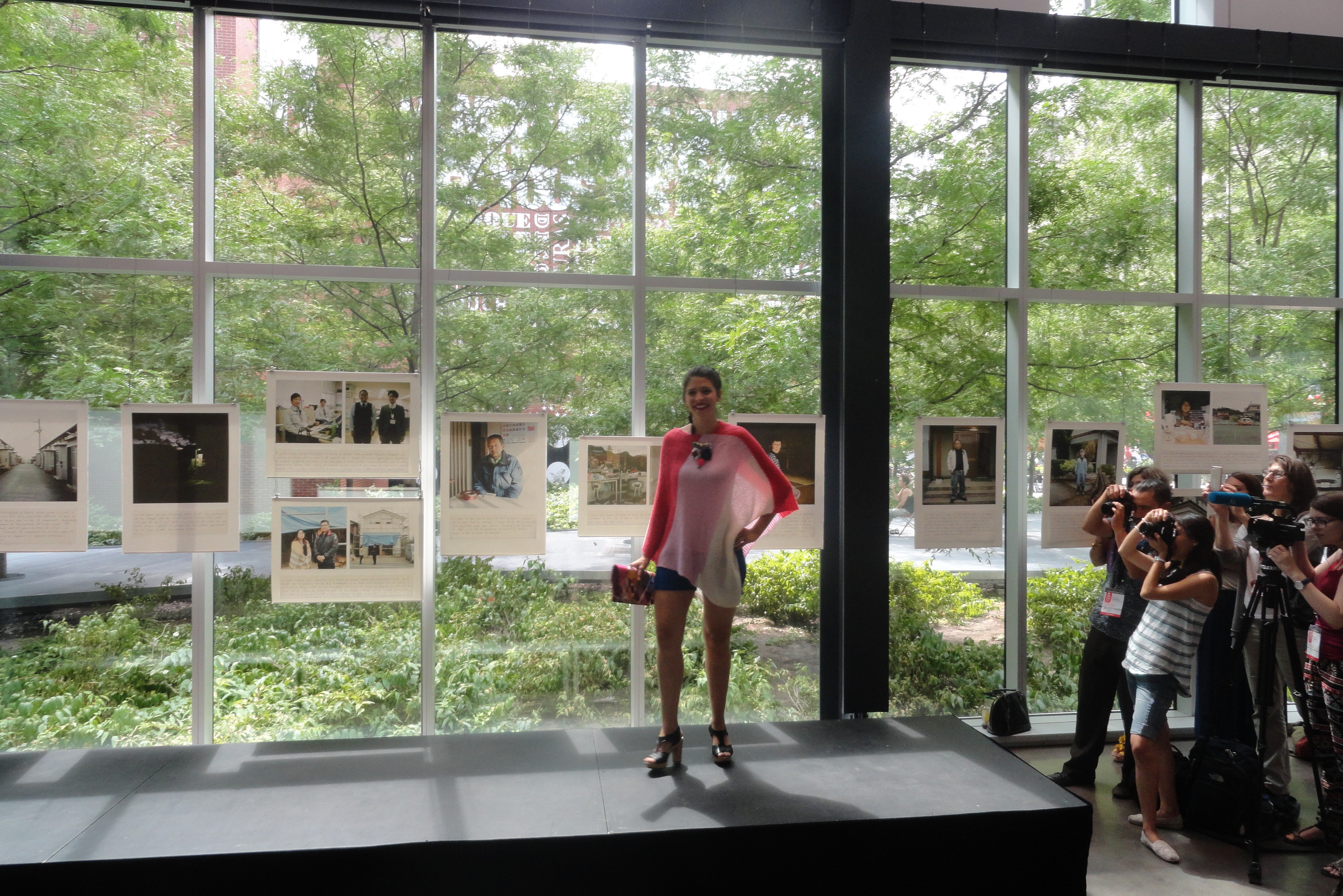 At the same time, the WSF 2016 was a great opportunity for Uniterra to demystify and explain what international volunteering is and what forms of solidarity underlie its success to the general public.

Far from the “missionary” of old or “voluntour-ism” or “altruism”, being a Volunteer is a personal and professional commitment that leads to an exchange of expertise based on the values of empathy, respect and solidarity. This was the message conveyed by the four volunteer representatives from CECI, Oxfam-Québec, Cuso International and Suco within the La coopération volontaire : comment ça marche? Qu’est-ce que ça donne? Conference held on August 12th. At the conference, shared ethics and visions for development united the four organizing NGOs, and four components of their approach were specifically analyzed: (1) the importance of partnerships (involving the concept of local development) (2) the capacity building approach (our support for our partners as participants of their own development projects), (3) the relevance and significance of the cross-cutting issues of gender and environment, and (4) the commitment created by a volunteer cooperation mandate before and after the mandate is completed.

As the representative of the Uniterra program, I was thrilled to be part of such a great panel of communicators. We not only spoke of how our volunteer cooperation programs function, but also about our passion for the issues addressed. The dynamism during the question period was particularly inspiring, and suggested that the fifty or so participants crowding the room had a strong interest in the subject. 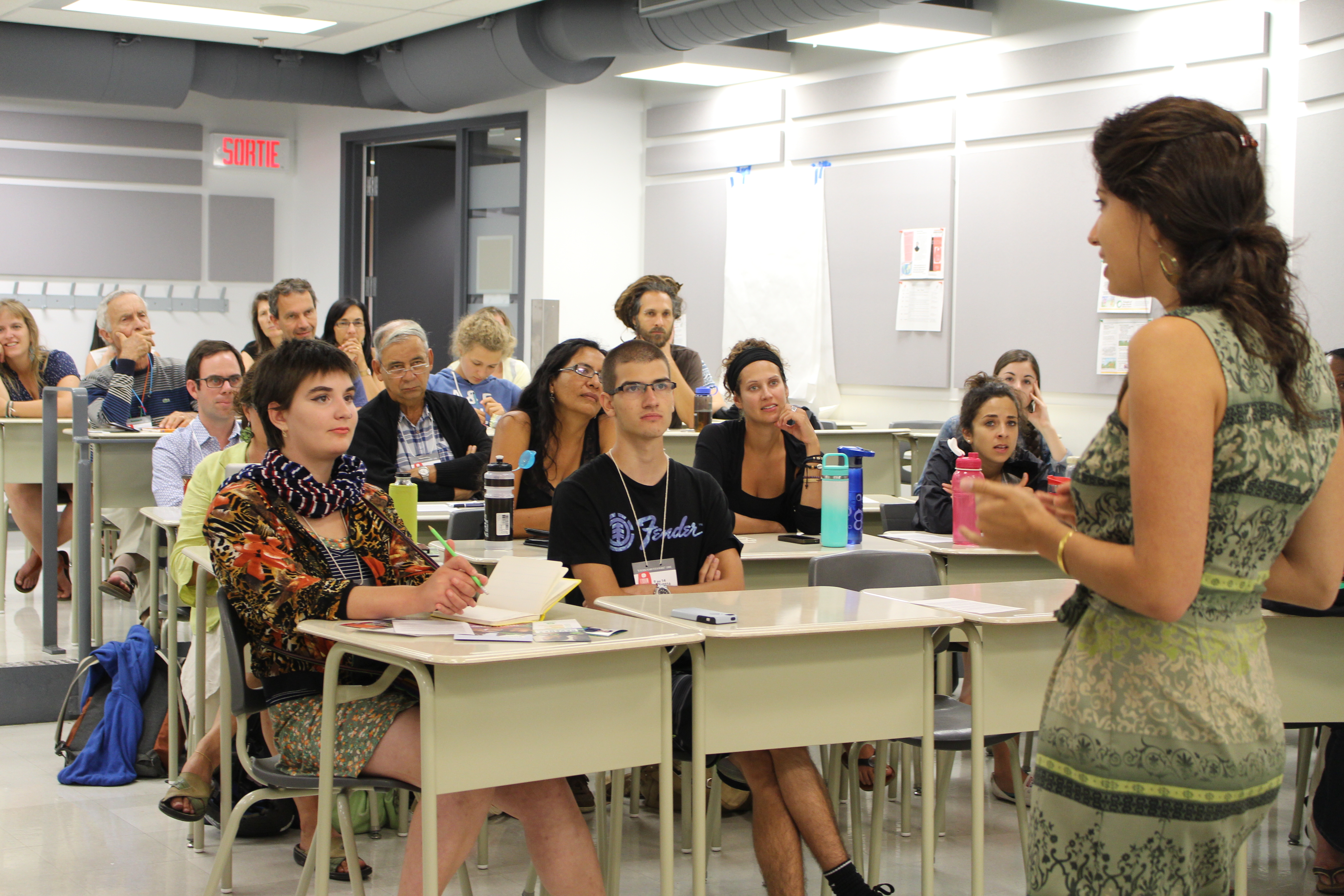 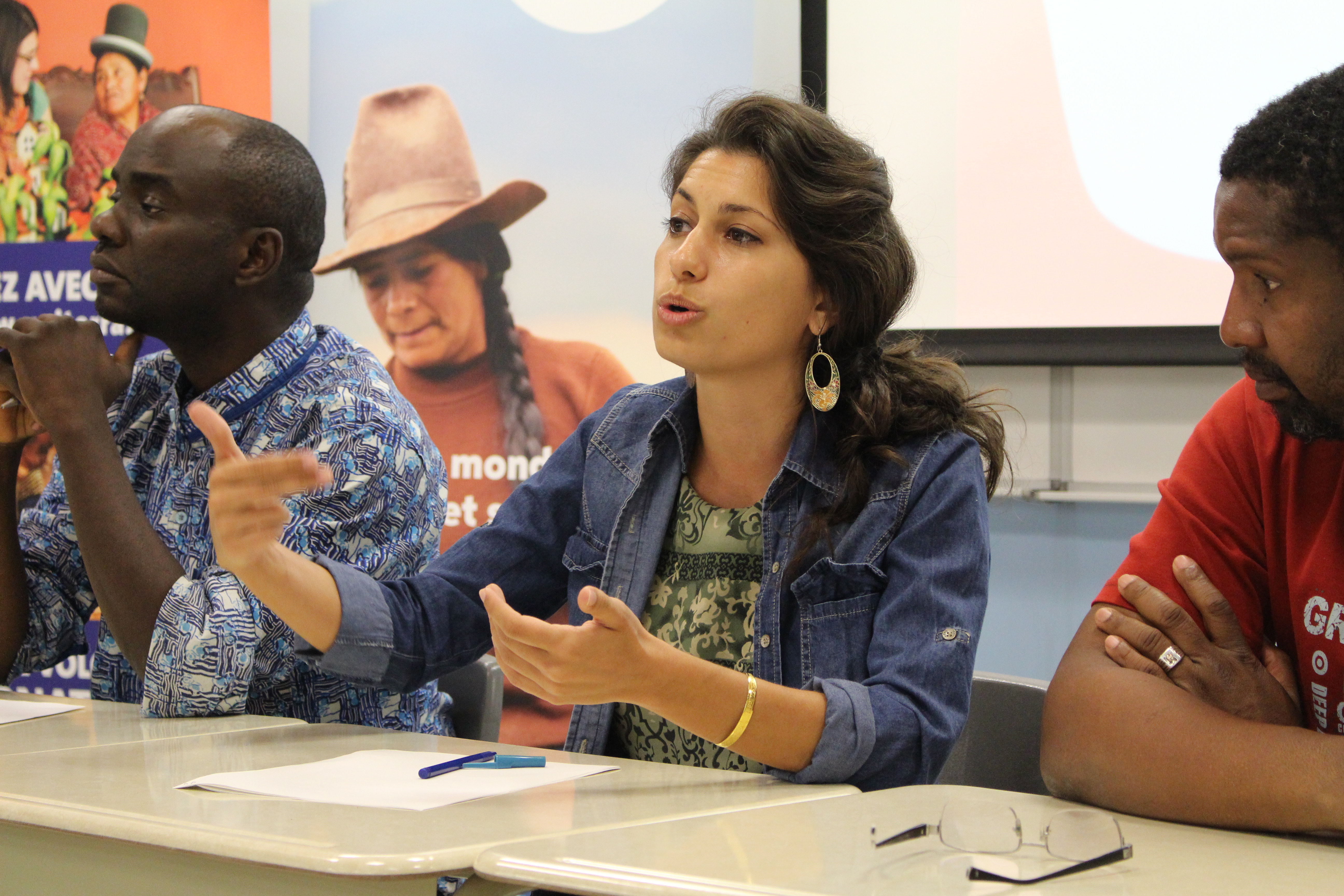 Alongside the workshops, on the 10th, 11th and 12th of August, Uniterra welcomed the public at its information booth located in the International Solidarity Space, where many activities were offered to try and engage the public. More than 200 posts abroad connected to PCV Haiti and Uniterra volunteer programs were unveiled there, offering many opportunities for engagement in international solidarity.

As of August 10th, after the Comment susciter L’engagement durable chez les gens qui vivent une expérience de solidarité internationale? Conference (Organized by the Groupe d’entraide internationale Spirale), Communications Adviser Arnaud Deharte introduced various forms of possible longer-term commitments, including the continuity of a mandate for cooperation. Volunteering, registration as a resource for future volunteers and organizing outreach activities for the public are just some routes of engagement proposed by Uniterra.

And so, beyond the visibility granted to CECI and Uniterra projects and programs, one of the best parts of participating in the WSF was definitely all of the organized and monitored activities that helped to promote the variety and forms of engagement offered to the citizens of the world. 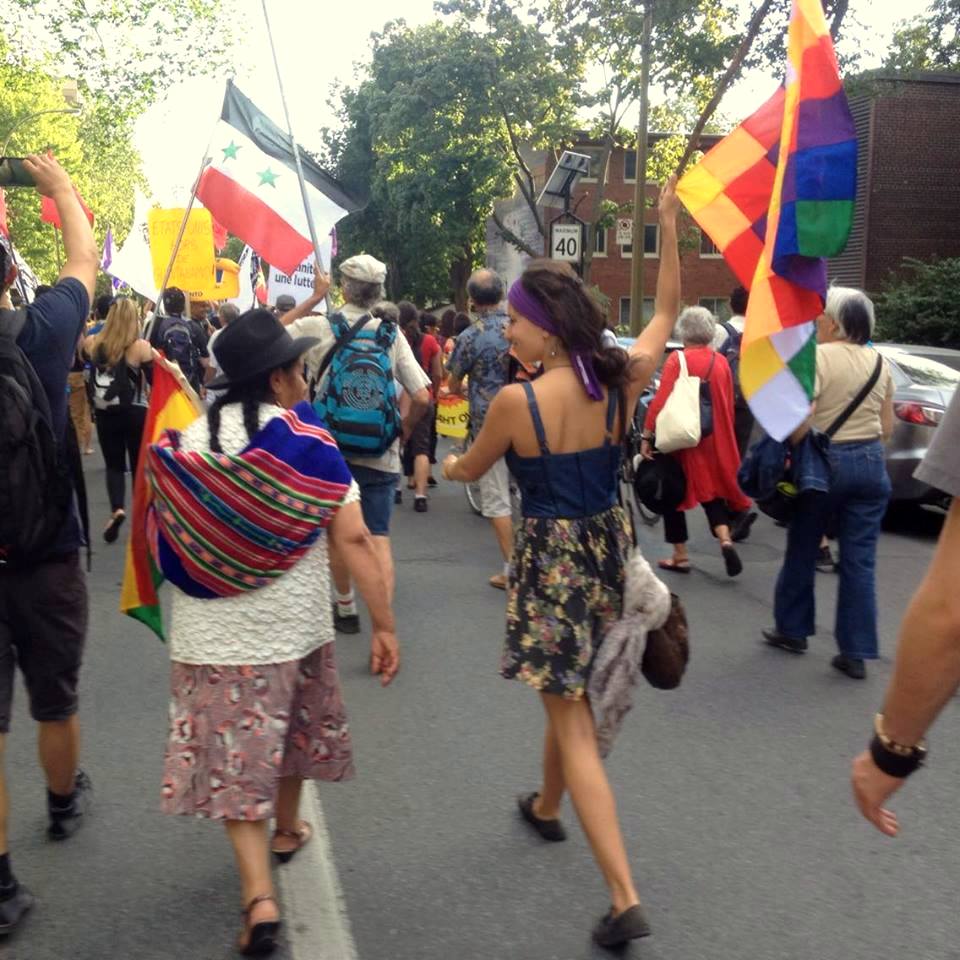 The WSF 2016 has closed its activities on Sunday, August 14. The formidable resonance of thousands of ideas colliding against one another ultimately fell silent.

Constantly committed to improve people’s lives, the CECI was able to develop, share and work with other actors who believe not only in the need of a better world, but in its possibility. This synergy was a real source of motivation and inspiration for us. The WSF has allowed us to “take the pulse” of civil society in general, while recognizing the diversity and specifities of one another. It also enabled us to consolidate the relentlessly growing movement for a more just and equitable society. Ultimately, don’t the real solutions simply stem from the discussions, deliberations, and awareness between who join together?

Fortunately, the FSM does not end there. Indeed, each participant returns, carrying with him/her the echoes of this essential meeting, a totally renewable energy that can be adapted to his/her local reality, applied by his/her community and shared with every person who has the future of humanity at heart.