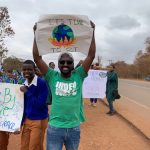 I have spent the last three and half years in classrooms at the University of Waterloo learning about development issues facing the world; from the injustices against Indigenous Peoples in Canada to the Cochabamba water war in Bolivia, to recurrent famine in the Horn of Africa and colonialism and colonial legacies, and more.

So, I was excited to finally go overseas and learn about some of the issues firsthand. Canada has been my home for the last five years and I have had many wonderful experiences, along with a few challenges that have shaped me to strive to be a better person. I am originally from Kenya, East Africa. The more I learned about development issues in the region, the more I became emotionally invested and I developed a strong desire to come back. Therefore, I will be calling Arusha, Tanzania home for 7 months where I will be volunteering with World University Service Canada (WUSC) as a Youth Engagement Advisor for their partner organization Jitegemee Vijana Tanzania (JIVITA) Foundation.

During my first month in Arusha I was continuously reminded of the stark contrasts that divide the world. Arriving at Kilimanjaro Airport the drive to Arusha filled me with nostalgia of my childhood memories in Nairobi. As days passed by, it dawned on me that I missed the lively hustle and bustle of my homeland. From the weather, fauna, roads, buildings, transport system, hawkers on the street, and the chatter of Swahili coming from the street made it feel so visceral to be back home. I could continue describing my feelings in great detail but I am not in Arusha for that- I am here for my placement and I am keen to do justice to the work that brought me here.

Tanzania has a total population of about 58.5 million with a median age of only 17.7 years of age. Nearly 44.8% of the population is under the age of 15 [i]. The majority of these young people face myriads of issues that hinder their development. Some of the main challenges youth in Tanzania face include unemployment, lack of quality education, and poverty. JIVITA Foundation is a proactive youth-led organization that seeks to address different socio-economic challenges facing the youth in Tanzania. For examples, JIVITA mobilizes resources to provide sanitary pads to young girls in marginalized communities, they rehabilitate street children and help them to re-enter school, and they fundraise to pay school fees for students from poor families. Furthermore, the JIVITA Foundation is keen on environmental justice issues especially climate change that is affecting many Tanzanians negatively.

Climate change can be observed in altering climate systems such as rainfall, temperature, or wind over a long period of time. Fluctuations in climate can be due to natural factors such as changes in the sun’s intensity, volcanic eruptions, slow changes in the Earth’s orbit around the sun, or changes in the ocean current circulation[ii]. However, the greatest cause of climate change is anthropogenic (human-induced factors). Capitalism especially continues to destroy the earth through its basic assumption that you can exploit as many resources in the world that you want if you have political power and financial resources. As a result, the Western world continues to over produce and over consume in order to grow the economy. The obsession with economic growth is at the heart of the fossil fuel energy industry that is the main source of greenhouse gas emissions responsible for climate change. This push against planetary boundaries has made climate change a true manifestation of the tragedy of the commons that is affecting every part of the planet. Rich Western countries emit the largest greenhouse gas per capita yet poor global South countries and marginalized Indigenous Peoples are bearing the brunt of climate change disproportionately[iii].

African countries in particular are most vulnerable to the impacts of climate change as they face financial and technological constraints to mitigation. Africa also has low adaptive capacity to changing climate variables such as temperature, rainfall, and extreme events including droughts and floods. Consequently, sectors like water, agriculture and food security, health, terrestrial ecosystem, and coastal zones are severely vulnerable to climate change. Moreover, there is a nexus between climate change and youth empowerment. Climate change severely affects the agricultural sector, the largest industry which employs most Tanzanians (as of 2018, 66.35% of Tanzanians were actively employed in the agricultural sector). This directly affects youth who make the majority of the population. If the current trend continues, youth in Sub-Saharan Africa will be at a more disadvantaged position as the region’s population continues to grow exponentially to become the most populous region in the world by 2050. Therefore, climate change is a complex crisis that poses real threats to Africa’s current and future generations. JIVITA Foundation appreciates the magnitude of these threats and they have taken upon themselves to prioritize fighting climate change as their main organizational goal.

My experience in Tanzania thus far continues to shape my understanding of the effects of climate change. My interactions with local people and their stories of unpredictable rainfalls and low crop yields demonstrate the impacts of climate change on the livelihoods of many people. I am also gaining a deeper understanding of the blind spots of fighting climate change. Whereas climate change is a global phenomenon, there is over-simplification of the real issue by Western world and especially the media. For instance, even though it is encouraging to see that many young people around the world are taking steps to demand for climate actions through protests,  there is a double standard how Western media portrays only youth from Western world to be climate warriors. Ironically, climate change for many Western youth is a theoretical discussion but for many young Tanzanians, it is already affecting their living and economic well-being. Yet I have seen enough courage, innovation, and concrete steps taken at the grassroots level by Tanzanian youth to fight the impacts of climate change. In the last one month alone, we have extensively travelled to different regions, toured over 35 schools and villages to sensitize the community on climate change. We also planted over 2000 trees! In addition, we organized Tanzania’s first climate strike as part of global climate strike on September 27th 2019 where thousands of young Tanzanians came out to demand for actions against climate change at a local level.

I am very conscious not to portray myself as coming “to solve Africa’s problem” or “change the world” for that matter. African youths are very clearly helping themselves; they know the issues they face and they have brilliant ideas on the solutions to their problems. I am humbled that I’ve gotten the opportunity to work with youth who are open minded, and our regular discussions during work have made me gain new insights on climate change. Climate change is a complex cross-cutting issue that requires concerted efforts both at individual and collective level to come up with localized interventions. It is for that reason that on the 14th October 2019, we launched the Tanzania Youth Climate Action Network (TYCAN) to give youth platform to collectively tackle climate change. The main objectives of the TYCAN are to inspire and equip youth to create local solutions to climate change, educate the masses, advocate for better climate change policies, and harness youth entrepreneurial ideas targeting a green economy that will contribute to mitigations of climate change. The event was very successful in bringing hundreds of young people together to network and form strong relationships. It is very important that we continue to amplify the voices of the youth. After the event, we held a roundtable discussion at JIVITA’s office where youth leaders from secondary schools, colleges, and universities converged to come up with both short term and long term goals for the TYCAN. Going forward, we plan to collaboratively work on those goals and engage with various stakeholders on climate change mitigation.

To conclude, it has been a fulfilling journey thus far. I feel reconnected and rejuvenated working with brilliant youth and it gives me the motivation to continue working hard. I even took part in a city-wide 10 KM marathon on October13th 2019, a day after Kenya’s Eliud Kipchoge finished a marathon in less than two hours becoming the first person to do so. I learned a valuable lesson from Kipchoge’s fete. He was assisted by 36 pacemakers to finish the race. Similarly, we need different pacemakers to tackle complex development issues like climate change. I hope to be a pacemaker for JIVITA Foundation and Tanzanian youth in general, as we collectively strive to fight climate change.