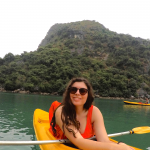 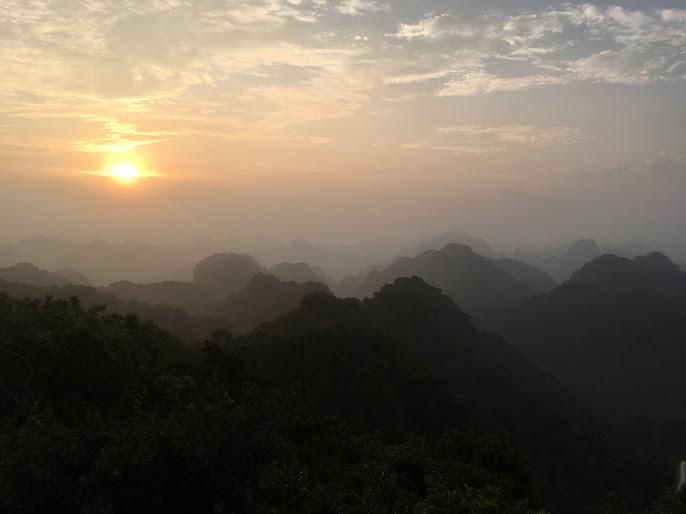 Morning sunrise on a peak in Cat Ba Island, the largest and most populous of 367 islands in Ha Long Bay, and a popular hiking destination for tourists visiting the world famous UNESCO Heritage Site. photo: Clare Williamson, 2019.

Ha Long Bay, located 165 kilometres from Vietnam’s capital city, Hanoi, is a bay containing over 1,600 limestone islands and islets found in bright emerald waters. This bay is widely known for these natural features which make it a popular tourist destination for mountain climbing, cave exploring, snorkeling, and kayaking. Furthermore, for the 38,000 people that live and work within the 3 coastal wards of Ha Long City, the bay has remained an important economic hub as a commercial port, mining area and act as a source of livelihoods for the city’s fisheries and service industries. Presently, Ha Long Bay is one of Vietnam’s top attractions – welcoming over 9.87 million tourists yearly – with an annual revenue growth of 30 percent. The increase of economic activity within the bay has created opportunities for tourism industries, as more ports are built to accommodate the growing number of cruise ships and boat tours. For many of these boats that cruise the bay each day, few vessels contain proper water and sewage treatment. The ever-growing sectors of personal and business activities continue to rapidly degrade the natural scenic features and geomorphic landforms through one of the most prominent signs of human occupancy in the area: plastic waste.

In October 2016, I had the opportunity to visit Cat Ba Island, situated in Ha Long Bay. What I did not expect prior to this experience was the sheer volume of pollution in an area that has been described by UNESCO as “uninhabited and unaffected by a human presence.” The water is visibly dirty in places and there is rubbish such as 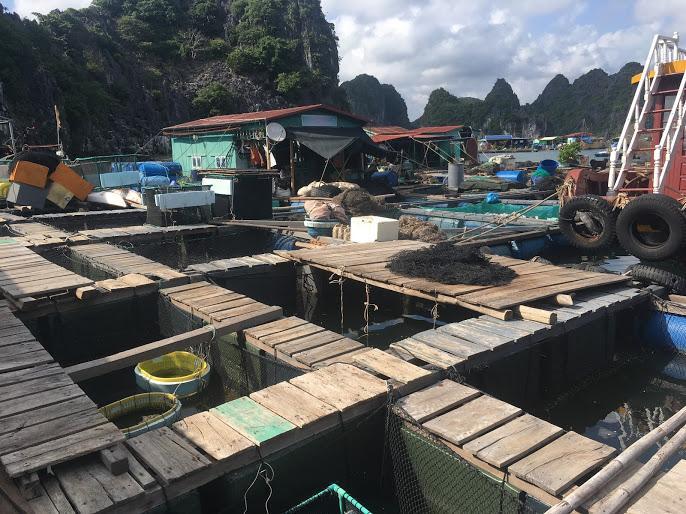 Floating villages located in Ha Long Bay that are a series of rafts connected by catwalks. Pictured in between are netted areas for aquaculture. Communities have lived and thrived here for generations, relying primarily on fishing livelihoods. photo: Clare Williamson, 2019.

The famous floating villages, constructed by rafts precariously connected by docks and the intersecting enclosures of aquaculture, looked as if they had trapped more rubbish in the netting than the intended shellfish. These floating villages have passed down the same fishing livelihoods through generations but due to the the various levels of tourism-based human activity there is concern by locals over the levels of pollution that have begun to directly affect their daily livelihood. Many locals who have frequented the area within the last decade, along with my colleagues at the Centre for Marinelife Conservation and Community Development (MCD), share similar sentiments of the area’s degradation within the last decade.

Plastic marine debris that has been caught in between and around the floating villages of Ha Long Bay. photo: Clare Williamson, 2019.

The problem is being studied to conceptualize how much of the garbage in the Bay flows down from the Red River and its tributaries. Much of this comes all the way from Hanoi, the nation’s capital – a city of 7.6 million people  – and the outlet from the Red River Delta to Ha Long Bay has been recognized as one of Vietnam’s most major contributors of waterway plastic pollution leakages into the ocean (seconded to the Mekong River). As of December 2018, Vietnam’s Ministry of Environment and Resource Management (MONRE) has begun holding consultation workshops to create a National Action Plan (NAP) on Marine Plastic Debris Management in the first steps towards addressing the current challenges and potential solutions to plastic marine pollution in Vietnam.

MCD, my host organization, has recently undertaken the challenge of finding solutions towards the problem of marine pollution in Ha Long Bay. Currently, we are looking at how the municipalities of Ha Long City manage plastic waste through a project funded by funded by United States Agency for International Development (USAID) which will begin to understand which stakeholders are involved in the existing municipal solid waste management systems in Ha Long City and address this issue by reducing the overall the amount of marine plastic debris that currently resides within the bay. 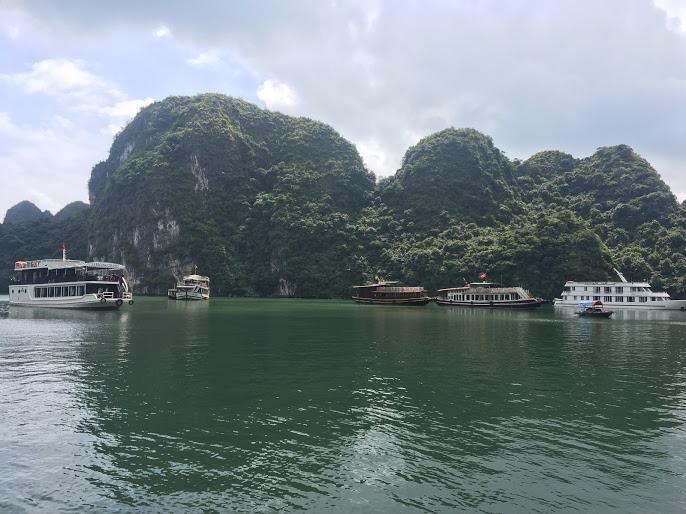 The seascape of Ha Long Bay is changing everyday as the number of tourist driven cruises and tour boats begin to occupy the bay. Pictured above are several of these vessels which are all intended to cater to the increasing amount of tourists that flock to the bay annually. photo: Clare Williamson, 2019.

At the moment, the municipal government agencies responsible for waste – such as  Ha Long City Management Board of Public Services and Ha Long City Department of Public Services –  are overwhelmed by the problem, particularly as the tourists keep coming. According to the Ha Long City Management Board of Public Services spent over VND4.5 billion (CAD$25,000) last year in just collecting garbage leakages from the bay due to poor infrastructure management. While municipal-led cleanups of garbage in the Bay is an important start, MCD ultimately wants to take the issue further upstream and target polluters at the source for sustainable action from local stakeholders (e.i. local government, fishing communities, local residents, small businesses, etc.) to create co-operative action plan that will ensure shared value, responsibility and ownership for the wellbeing of Ha Long Bay marine environment.

MCD is developing an ambitious 18 month work plan to help bring all these stakeholders together to agree on needed action through targeted awareness-raising campaigns, training workshops, ongoing dialogues, facilitation of partnership agreements and Government regulations, and technical and governance assistance. The hope is that through all these activities initiated by MCD local government, citizens groups and local communities can work together more cooperatively under an agreed framework. For MCD, which has years of experience working with local communities who depend upon the ocean for their livelihoods, this project is an introduction for MCD into the issue of marine plastic pollution that will allow their team to build knowledge and expertise for ridding the country’s coastal waters.

This will not solve the world global crisis of marine pollution or likely move Vietnam further down on the list of contributors to this problem. However, the expected results of project activities aim to address the largest challenges of the fight against plastic marine debris in Ha Long Bay such as increasing private-sector accountability and increasing capacity of directly public-sector waste management infrastructure. As a result of this project, there is a further possibility to introduce low-cost and adaptable solutions that hold the potential to be scaled into marine environments throughout Southeast Asian nearshore communities.