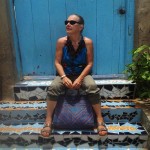 My last week in Ouaga

I am sitting in the restaurant at the Ouaga airport catching my breath after a frantic week.  I was visiting the region surrounding Nordgold’s Bissa mine, meeting with local suppliers (including a womens’ soap production cooperative, a soft drink and beer seller, several market garden enterprises and a cattle farmer) last Wednesday.  On Thursday I delivered a training session on sales contracts (me in French with a translator to the local language Mori) at a marathon meeting with local suppliers in Kongoussi (centre north region).  On Friday I wrote up the report on the visit and on Friday night attended a concert at one of my favourite Ouaga restaurants, Café du Vienne.  The weekend was a blur of packing (me to come home, Adrian to his new digs) and visiting favourite restaurants for the last time.

I got to the office on Monday planning to complete my online reports for CECI – no internet.  I took it as a sign that it was time to pack up my stuff and leave the office (with its super unreliable internet) and finish up from home (with what might be the best internet connection in Ouaga).  When I told Alin I was heading home to work he asked if I was coming in on Tuesday.  Thank goodness I had the sense to say ‘non’  and remind him that I was leaving on Wednesday and still had a lot to do.

My two preoccupations:  selling my (crappy) car (the brakes gave out on Saturday); and figuring out how to get two years worth of stuff (including a 150 cm long butterfly mask, a 160 cm Sengalese statue, a 50 cm round mask and carved door from Mali) packed in four suitcases each weighing less than 23 km.

I had placed an ad for the car in the local ex pat ‘announces’ and received one call.  I paid CAD$4,000 (way to much I now realize) in April and was asking $3,000.  I was pretty depressed when someone told me that I would be lucky to get $1,000.  Frankly, by Monday, Adrian and I were discussing scenarios where we dumped the car in a field and removed the licence plates (and maybe set fire to it).   I was obsessing  and fussing.  Luckily I called my landlords at Chez Guiliana and Andrea put me in touch with an Italian businessmen looking for a cheap car who offered me $1,600.  Andrea put the car through its paces, noting the problem with the brakes but also that the motor, steering and engine heat regulation seemed fine.  After Andrea’s report on the test drive the Italian would not bargain.  When Andrea said he could have the cash for me by noon the next day and help me with the transfer paperwork, I accepted the offer with great relief.  On Tuesday, with Chez Guilana’s fixer Moussa we accomplished what would have taken me days in an hour, including trips to both the Ministry of Transport and the Police Commissariat.  We used the services of Francois who filled out the forms for us then magically got me to the front of the line at the Commissariat to get the sale registered.

Also on Monday I attempted to package the two masks, the statue and the door, using pillows and string, planning to take my package to the airport to be wrapped in plastic.  Adrian’s assessment of my effort was that everything would break.  After many summers of sailing Adrian is a master knot tier and he put a pretty solid package together on Monday  for the butterfly mask and the statue and packed the door and round mask in my biggest bag. On Tuesday I took Adrian’s package to the airport to have it wrapped and the trip went like clockwork.

Tuesday night CECI kindly hosted a going away reception and presented me with the cutest souvenir of Ouaga, a little painting with me in it.  After CECI, I had dinner with the Essakane wives.   Before I left on Wednesday, I managed: a walk in the park; lunch with some ABSM members where I received another lovely painting (this time of a baobab tree); a swim at the Rec Centre; to attend my last yoga class; and, to pack my three very large bags in such a way that I got away with a luggage surcharge of only $225 including the package containing the mask and the statue that Adrian wrapped for me.

Here I sit waiting for my plane to Casablanca (via Niamey) which is scheduled to leave at 12:40 this morning.  If all goes well I will arrive in Ottawa at 11:45 tomorrow night (Thursday) after an eleven hour layover in Casa and a very long day of travel.

All in all one of my more productive weeks!