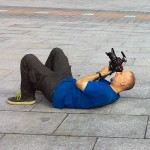 Street space is multi purposed in Vietnam. The sidewalks are often given over to parking for motorbikes and pedestrians walk on the edge of the road. The sidewalk in this photo was clear in the morning when I took this picture but when I returned later in the day the woman selling lottery tickets in the middle ground was gone and a cafe had filled the empty space in the foreground. It was full of people having iced drinks in the heat of the day. Later that night the cafe disappeared and there were a few hours of respite before the lottery ticket woman returned on her bicycle and the cycle was repeated. There was a refreshing lack of bureaucracy and bylaws in Vietnam that made this kind of multi-purposing possible. Despite it’s official status as a Socialist Republic and all the baggage that implies to Westerners, there was a lot of freedom (often more freedom) in Vietnam.