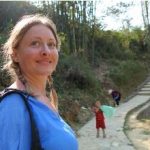 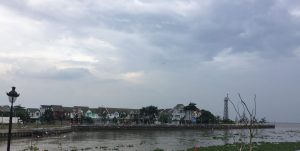 It’s been a week now since I arrived, which was late in the evening March 17th. In a blurry, fatigued haze I preceded through customs no questions asked, found my luggage and made my way through the exit of the airport. The humidity struck me instantly and I new I wasn’t in Kansas anymore. Effortlessly, I spotted a sign with my name on it and knew that must be my driver. A young, eager Vietnamese girl walked me to the curb where I was to wait for the vehicle. What felt like only a few minutes the driver arrived and loaded my belongings into the back of the van. We drove in silence to the hotel. I observed what I could but the night sky and my fatigue made it difficult to get a clear idea of the cityscape.

All I could think about was how tired I was but my excitement kept me going long enough for me to shower and enjoy a much needed glass of wine in the lobby of the hotel. I observed the many couples that came and went already gaining an impression of the hotel. I thought this was no ordinary guesthouse. The room itself was comfortable enough with basic amenities and a small mini bar.

I woke the next morning after a restful sleep and my suspicions about the hotel were confirmed when I found a used condom wrapper next to the bed. I was mortified as I had slept in the bed and didn’t even question its cleanliness. I wondered if the room had been used for a quickie prior to my late arrival. All I could do was push that thought out of my mind because even if it had there was nothing I could do about it. I did ask the front desk if they could clean the room and change the sheets. Funny thing though, before I left the room on my last day I did my usual inspection to see if I had left anything and that darn condom wrapper was still under the bed. I knew at this point I had to lower my expectations and keep in mind that standards are different everywhere.

I spent the first few days wondering around the city discovering areas I had never been to before and revisiting ones I had been to last year. This time around is a completely different experience as I’m not with my husband. With his support, I decided to come to Vietnam on my own. There are times, I wonder if I’ll be able to last a whole year without him but I do my best to embrace the opportunity and make the most of it. I was glad to have had the first two days on my own so I could adjust to my new surroundings and learn to be by myself.

I am now in Rach Gia, a city in the province of Kien Giang where I’ll be living for the remainder of my mandate. It’s a beautiful little port town with a couple of decent supermarkets and many alluring cafés and restaurants. Today, I ventured out for the first time on my own and was able to find a restaurant that had an English menu and servers that spoke a little English.

I look forward to starting my mandate tomorrow as Customer Service Training Advisor for Kien Giang Technical and Economics College. Working at the College is the whole reason why I’m here and even though I have an idea of what I’m going to be doing, I’ll be working with new people in a new environment. I’m excited and nervous all at the same time. Wish me luck!