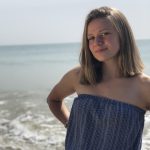 Businesswomen budge the line on poverty: The burdens (and opportunities) of female entrepreneurship

A few months ago, my thoughts on female entrepreneurship were few and far between. My name is Hannah and as an undergraduate candidate of International Development at the University of Waterloo, I rarely consider the world of business. Yet, as I have come to notice during my few months in Dakar as a Communications Officer with CECI Senegal – business is everywhere. From the fruit sold at the end of the street to the mechanic at the other end of town, enterprise is the blood in the beating heart of Dakar, and women are its arteries. Allow me to explain.

In past years, we have come to understand that positive and durable change is most often created by communities, for communities. Furthermore, women are key proponents of this change; as compared to men, women are more likely to reinvest income into the wellbeing of their children and community. At first glance, female entrepreneurship – a perfect intersection between these factors of autonomy and efficiency – seems to be a silver bullet. And yet, as promising as this approach is in theory, it is challenged by a reality called the feminization of poverty; a phenomenon in which women are disproportionately subjected to the issues and related effects of poverty.

During my time in Dakar, I have had the opportunity to understand how this manifests in the lives of female entrepreneurs. As part of the 74th annual edition of the International Seminar, an event run conjointly by CECI and WUSC within the framework of the Uniterra program, I had the pleasure of connecting with 20 young businesswomen – 11 from Senegal, 9 from Canada – to better understand the challenges and opportunities of their livelihoods.

As it turns out, women on average have lesser access to finance and resources as compared to their male counterparts. Combined with greater social responsibilities and higher social pressures (struggles recounted by each participant), these constraints make it difficult for women to do the transformative work of which they are so capable.

Interestingly, these challenges not only highlight the importance of working to support female entrepreneurs, but also reveal some of the approaches in doing so. To take the example of finance, money between spouses in Senegal is generally managed by the husband. When his wife wishes to start a business, therefore, it is within a husband’s power to deny the funds necessary, should he feel that it would be socially inappropriate or otherwise detract from her abilities to take care of household matters.

Therefore, rather than merely increase the funding available for female entrepreneurs, it might actually be more appropriate to create finance structure separate from traditional institutions, so as to allow married women the financial autonomy to begin their venture.

Based on my two weeks with the participants of International Seminar, I have begun to understand some of the many repercussions of this phenomena. Through discussion and debate, I saw the theme emerge often and while it paints a part of the greater picture of female entrepreneurship, I believe it still leaves something to be said.

The feminization of poverty is a double-edged sword; not only are women more often and more severely faced by poverty, they are also increasingly burdened with the responsibility to resolve these issues. The participants of the International Seminar proved to me without a doubt that women are capable of this, but first, more must be done to support female entrepreneurs – physically, mentally, and emotionally.

During the Seminar, this was clear; while the technical trainings were valuable, what impacted the participants most were the bonds they built amongst one another. Despite the differences in language, origin, or culture, they understood one another’s struggles and grew excited to celebrate each other’s success. During the span of two weeks, these 20 formidable women built a network of not only friends, but partners; a support group in the truest of senses.

In their limited time together, these women created a resource, rich in tools and knowledge, to help equip other young women in beginning or growing their business. Through their collective force, the participants even came so far as to plan their next projects together, in Canada and Senegal alike, which will only strengthen their bond for years to come.

As I move forward from this experience into my remaining months in sunny Dakar, I understand now more than ever that development is not merely a matter of funding, target audiences, and technology transfer. Rather, it is a purely human affair and deserves to be treated as such. As we ask female entrepreneurs to tackle some of society’s greatest challenges, we cannot forget the importance of their relationships, personal lives, and emotions; these facets are a part of the process like any other. For the sake of development and the women who drive it, we must transform the way we approach entrepreneurship and with it, our world.