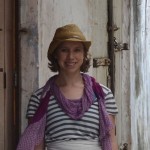 As we rattled over the dirt road, winding between maize fields and negotiating potholes large enough to bathe in, I wondered – not for the first time – why we were in a sedan, rather than the typical RAV4 you will see everywhere on the streets here. Better question – why would a taxi driver even agree to take us to Kikwe village?

Kikwe village is just outside of Arusha – about 30 minutes from our office, with much of that traveled at 10 km/h over the dirt roads. Loaded into our taxi was a radio broadcaster, two of my FRI colleagues and myself.

We were headed to Kikwe village to meet with two women’s listening groups who had – hopefully – been tuning in to a weekly program about growing beans. After initially missing the dirt trail through the grasses, we finally found our destination – the small cluster of homes nestled between fields planted with maize, beans and other vegetables.

More than a dozen women were awaiting our arrival, perched on low wooden benches in a gathering space outside of their homes, young children playing nearby or sleeping in their mother’s arms. These women were excited to meet with us, as they were receiving both a new radio and a lesson on using a cell phone to “beep-to-vox.”

Beep-to-vox will allow these women to share their voices with their local radio station – Radio 5 – so that they too can participate in the radio program. By gathering the voices and opinions of women farmers, a radio program can explore the particular challenges women face: Do they grow different crops? How do men help them on their farm? Do they wish men helped out with certain (heavy) tasks? The women’s listening groups will generally discuss the question of the week themselves, and “beep” to record the group’s response – or responses. This means, as a group, they can explore gender roles in agriculture – and perhaps raise a few of these questions with their husbands.

Women play an important role on farms here, often growing food for the family or for selling in the local market. But they may not control the income from their work or may want more support from their partners to accomplish certain tasks.

Many women are shy to share their voices with the radio station at first – but gain pride and confidence when they hear their voice over the airwaves. From my visit to Kikwe, it’s easy to see that these particular women do not lack confidence or opinions: I’m sure they will be frequent callers.

The one point of hesitancy is with the new phone. While many of these women have a cell phone, we were bringing them an Android smart phone. Fortunately, there are a few youth in the group who are quick to catch on to the touch screen technology, and to take each member of the group through how to beep.

“Beep-to-vox” is a system that allows farmers to call and leave a missed call “beep” to a particular number. The system then calls them back, asks the question of the week and invites the caller to record a message. The radio broadcasters then have access to a bank of voice recordings that they can use on their program.

It will be exciting to listen to a few of these voices from Kikwe village in the coming weeks.